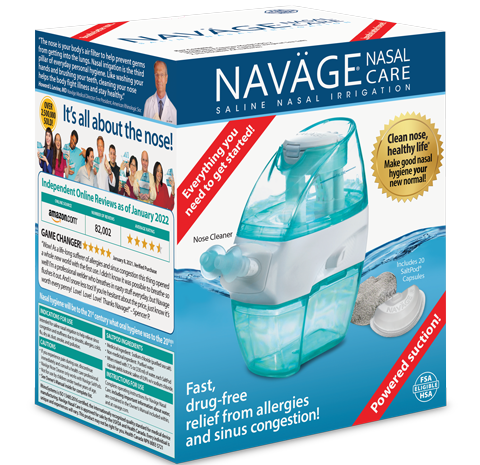 RhineoSystems, Inc., is finding a lot of room to breathe in our state when it comes to expanding its manufacturing and headquarters operations. The company, which manufacturers and distributes the popular Navage Nasal Care product has decided to lease over 65,000 square feet of a 1.6 million square-foot industrial park on the former site of American Greetings. The investment will result in the creation of approximately 117 jobs, according to the company.

Sold through major consumer outlets such as CVS and HSN, the company is expanding its operations to keep up with growing demand. JobsOhio and Team NEO collaborated to find RSI a suitable location that could provide plenty of room for the company’s robust operations. The site is bordered by railroad tracks and interstates 480 and 71.

“It’s been an amazing ride. It started at our kitchen counter, moved to Lorain County Community College’s GLIDE Incubator, then to about 25,000 feet in Brooklyn Heights,” said Martin Hoke, president of RhinoSystems. “We’re especially grateful to the state of Ohio and to the city of Brooklyn and its Mayor and Council, without whose support the relocation would have been extremely difficult if not impossible. I also want to thank the developer, Chris Semarjian, his son Austin and their entire organization, all of whom have demonstrated exemplary professionalism and a commitment to excellence on this project.”

“RhinoSystems is experiencing fast growth, and speed to market was essential to bringing this expansion and 117 new jobs to Brooklyn Heights,” said Aaron Pitts, JobsOhio senior managing director for healthcare. “We appreciate the collaborative effort with Team NEO and BioEnterprise to attract RhinoSystems to this site, which is helping boost Northeast Ohio’s reputation as a robust area for healthcare innovation.”

According to the US Centers for Disease Control, about 50 million people in North America suffer from chronic sinusitis. Nasal irrigation has been around for a long time. The neti-pot, a gravity-based product for pouring saline into one nostril and out the other, was first described in India over 500 years ago. Today, the neti-pot has been joined by dozens of commercially available nasal irrigation devices that rely on positive pressure generated by squeezing a plastic bottle to push saline into the nasal cavity. While this technique is effective, it’s also fairly primitive, and it’s off-putting for many.

Navage Nasal Care was born out of a solution to that problem. Its inventor Martin Hoke created a device that not only introduced saline into the nasal cavity, but also pulled the rinse through.

Of course it turned out to be anything but simple to actually create. However, with several years of hard work, endless prototypes and continuous testing, Navage came into existence and is now among the most popular consumer healthcare products in the nation. And it’s manufactured right here in Ohio, just outside of Cleveland.